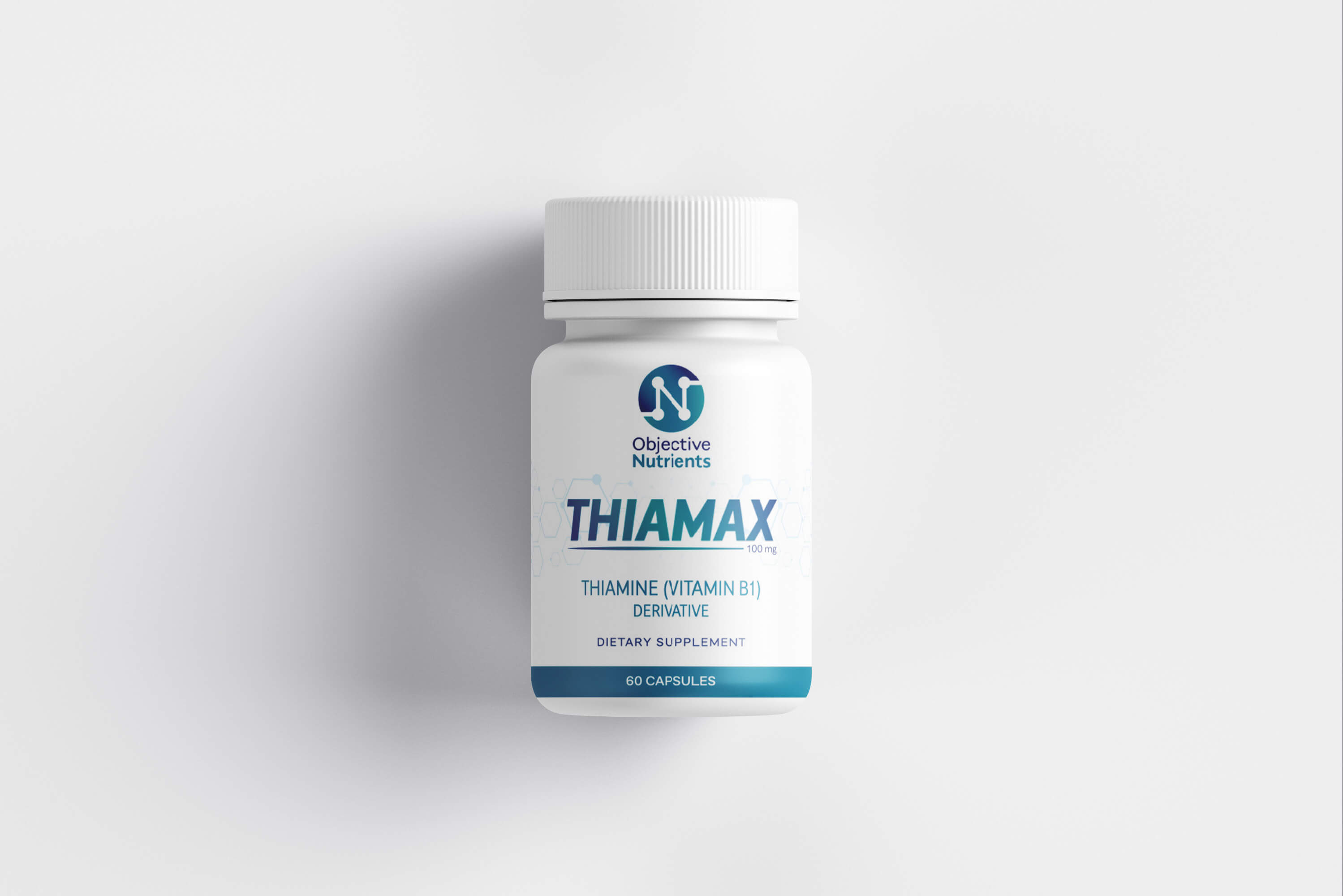 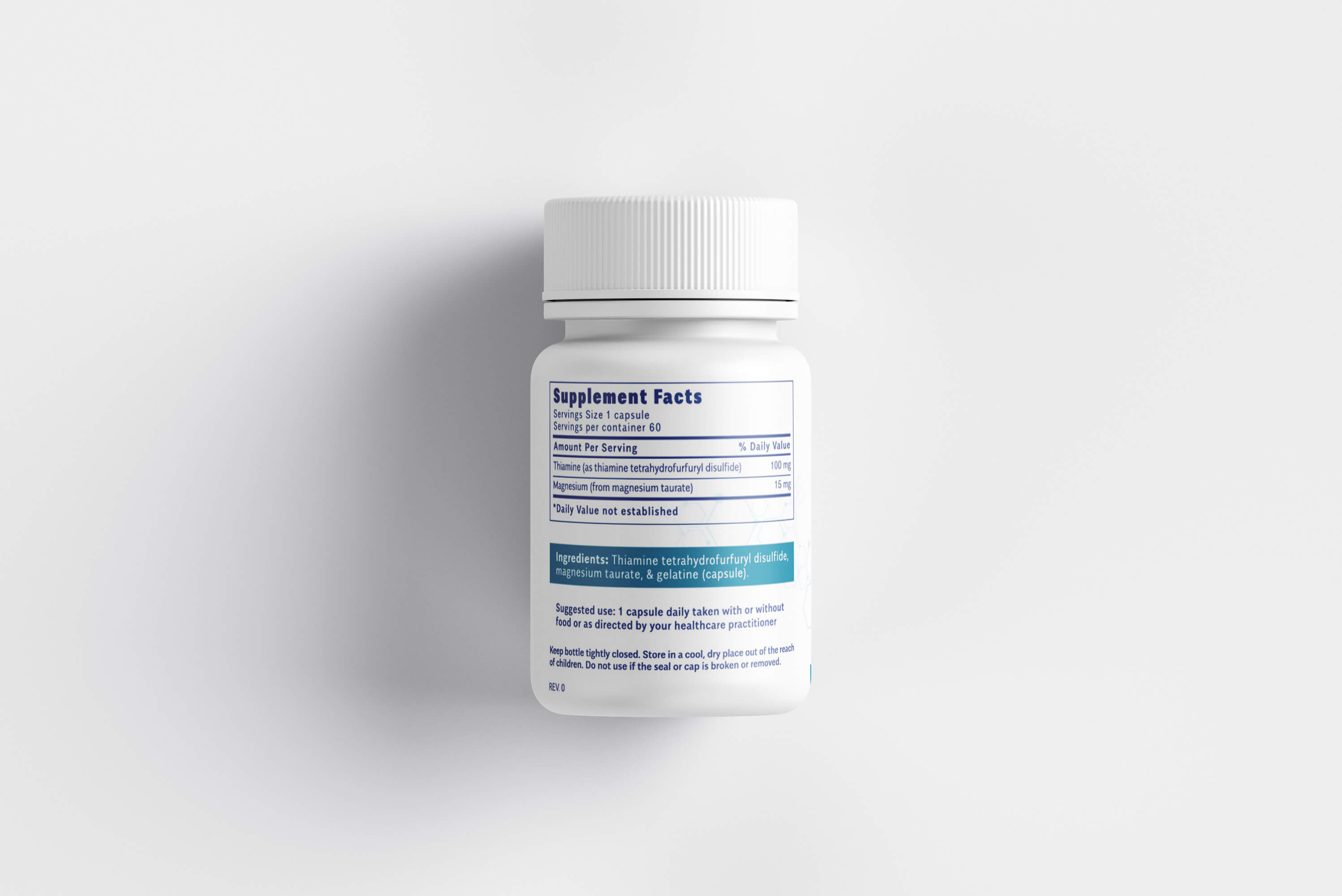 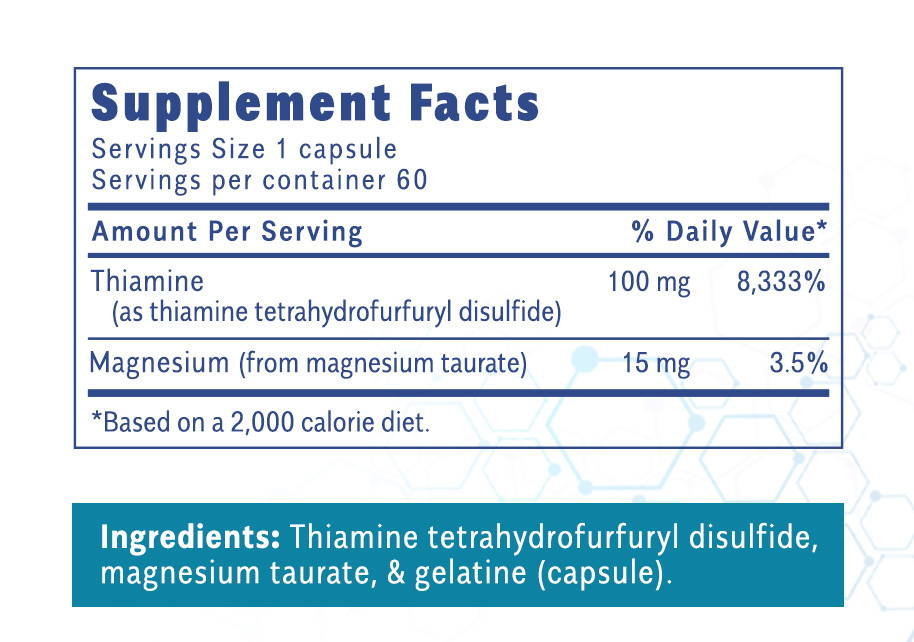 To place an order, please allow scripts for jsdelivr and/or ipgeolocate to continue and allow cookies
Thiamax

Thiamax contains thiamine tetrahydrofurfuryl disulfide, a derivative of thiamine (vitamin B1) with high bioavailability. This form has been shown to cross the blood-brain-barrier and can bypass normal routes of thiamine absorption, with a higher rate of uptake both in the gut and at the cellular level. Thiamax also includes a small amount of magnesium (as magnesium taurate), which plays an important role in supporting how cells can use thiamine.

* DUE to new covid restrictions in the uk, there is limited shipping to the EU at the moment.

if you reside in the eu, please contact us to place an order.

Thiamine is a water soluble B vitamin (B1) which plays essential roles in the breakdown of glucose and fatty acids for energy, in the metabolism of amino acids, and in maintaining a healthy antioxidant system. Thiamine is especially important for the health of the brain and nervous system, where it maintains energy production, neurotransmitter balance, and nerve cell function. Unfortunately, most forms of thiamine supplementation have poor oral bioavailability.

Thiamax contains a highly-bioavailable derivative of thiamine (vitamin B1) called TTFD - thiamine tetrahydrofurfuryl disulfide. This form has been widely researched in Japan for its therapeutic potential in addressing thiamine insufficiency.

Unlike other forms of thiamine supplementation, TTFD’s molecular structure allows it to pass through intestinal and cellular membranes without the requirement for a transport system. Once inside the cell, it can be activated and used as a cofactor in important biochemical processes.

TTFD also has a demonstrated capacity to penetrate the blood brain barrier and increase thiamine levels in the brain and central nervous system, where it may be used to support  optimal cognition and maintain autonomic nervous system function.

Due to its superior bioavailability, TTFD can be taken in much lower doses than what is considered the “therapeutic dose” of other forms such as thiamine salts.

Thiamax also contains a small amount of magnesium (as magnesium taurate), which is a mineral that is important for supporting how cells can utilize thiamine.

Deriving usable energy from dietary fats, carbohydrates, and amino acids involves a multitude of complex chemical reactions. Likewise, using dietary components to build and maintain our bodies also requires us to modify and process these molecules. To accomplish this we use enzymes, and for enzymes to function efficiently they often need cofactors in the form of vitamins and minerals.

Once activated, thiamine pyrophosphate may be used as a cofactor for a range of enzymes involved in energy metabolism. As the cofactor for an enzyme complex called pyruvate dehydrogenase, thiamine is essential for how the body derives energy from glucose in the Krebs cycle.

Another thiamine-dependent Krebs cycle enzyme complex is alpha-ketoglutarate dehydrogenase. Located in the mitochondria of the cell, this enzyme is involved in the processing of both glucose and fats for energy, as well as processing amino acids and neurotransmitters.

Insufficient thiamine can downregulate these enzymes [1, 2] and therefore reduce the rate at which cells are able to synthesize energy. A more recent discovery has shown that thiamine is necessary for the alpha-oxidation of phytanic acid and 2- hydroxy straight-chain fatty acids, through the action of an enzyme called HACL-1 & 2 [3].

Dietary proteins are broken down into amino acids, and one class of amino acids is the branched-chain amino acids (valine, leucine, and isoleucine). The thiamine-dependent enzyme, branched-chain-keto acid dehydrogenase, is required to process and make use of these specific amino acids. In fact, without this enzyme the amino acids can accumulate at toxic levels, which is seen in the inherited genetic condition Maple syrup Urine Disease [4] .

Furthermore, utilizing glucose for anabolic (building) reactions in the pentose-phosphate pathway depends on the transketolase enzyme, which also requires both thiamine and magnesium cofactors. This pathway is needed to synthesize the building blocks of DNA, fatty acids, and in regenerating our primary intracellular antioxidant glutathione, amongst many other things. Without sufficient thiamine, the activity of transketolase is reduced and these crucial functions are downregulated [5].

The activity of other enzymes are also influenced by thiamine phosphate esters, where thiamine is not acting as a cofactor but is instead involved in:

Thiamine is especially important in the brain and central nervous system. Due to its role in the pentose phosphate pathway, it is expected that deficiency would result in decreased fatty acid synthesis required to maintain myelin sheath [8]. Indeed, demyelination of neurons is a known consequence of severe thiamine deficiency [9].

Thiamine is also required to maintain sufficient levels of the neurotransmitter acetylcholine in the brain [10, 11] The balance between the excitatory and inhibitory neurotransmitters GABA and glutamate is governed partially by thiamine-dependent enzymes, and deficiency can induce neuroexcitotoxicity [12]. Some research indicates that different forms of thiamine also play non-cofactor roles such as maintaining neuronal ion channels [13] and facilitating synaptic release of neurotransmitters including dopamine [14].

Because of their high demand for energy, certain areas of the “lower” regions of the brain are particularly susceptible to thiamine deficiency. This includes the mamillary bodies, thalamus, hypothalamus, brain stem, and cerebellum [15]. Aside from many other functions, these regions are responsible for coordinating the activity of the autonomic nervous system.  This system is tasked with controlling all of the involuntary bodily processes including blood pressure, heart rate, blood vessel dilation and constriction, body temperature and digestion. When these brain regions lack thiamine, they can no longer generate energy efficiently. An energy deficit in these regions may therefore lead to a malfunctioning system [16]. The resulting autonomic dysfunction can have myriad downstream consequences on the other organs bodily systems - including the gastrointestinal and cardiovascular apparatus.

The most well-known disease caused by nutritional thiamine deficiency is Beriberi. Originally identified in Japan, this condition is known to manifest primarily as neurological, cardiovascular, and/or gastrointestinal dysfunction. In some cases a severe thiamine deficiency may produce Wernicke’s Encephalopathy and/or Korsakoff’s Syndrome, both of which involve degenerative changes in the brain.

Although the above conditions are now considered rare in developed nations, mild to severe insufficiencies of thiamine may be much more prevalent than was once previously thought. Chronic consumption of energy-dense processed foods bereft of essential micronutrients increases the likelihood of vitamin and mineral deficiencies. And due to thiamine’s essential role in processing of glucose for energy, a diet high in refined carbohydrates will almost certainly have a detrimental impact on the body’s thiamine status [17].

Below is a brief list of the main establish causes of thiamine deficiency:

-Medications such as metformin

-Tannins in tea and coffee

The most common forms of thiamine found in nutritional supplements are thiamine salts (hydrochloride & mononitrate). However, the intestinal transport system is saturable, meaning that absorption/bioavailability hits a ceiling and is estimated to be low at approximately 3-10%. To achieve great increases in blood thiamine concentrations, high doses must be taken.

Furthermore, transport of free thiamine across the blood brain barrier is thought to be a slow process [18], and so thiamine salts are unable to significantly increase thiamine levels in the brain as well as other formulations can.

Finally, the transport of thiamine into cells is dependent on membrane rate-limiting transport proteins which are also saturable.  There are also a variety of genetic polymorphisms which may predispose to less efficient cellular absorption and utilization [19].

With the above factors taken into consideration, it is important to choose a form of thiamine which can bypass these potential difficulties. And here is where TTFD comes in.

Thiamine tetrahydrofurfuryl disulfide (TTFD) is one of several thiamine derivatives originally synthesized and studied extensively in Japan. The molecular configuration of TTFD closely resembles a specific form of thiamine found in garlic, known as allithiamine. TTFD is synthesized by attaching an organosulfur group (a mercaptan) to the chemical structure of the thiamine molecule.

The disulfide portion of TTFD allows thiamine to freely diffuse across membranes without the requirement for a transport protein. The rate-limiting transport system can therefore be bypassed both at the intestinal and the cellular level. Due to this quality, TTFD produces high levels of thiamine in the cell to be utilized for biochemical reactions, and the intestinal bioavailability is much greater than thiamine salts [20].

It is water-soluble, although due to its capacity to transit through the lipid bilayer of cell membranes it is often referred to as “lipid-soluble”. TTFD has been shown to increase organ thiamine content to a greater degree than thiamine salts [21], and may also possess antioxidant [22] & anti-inflammatory properties [23]. It has been shown to be non-toxic, even at high levels.

Furthermore, TTFD crosses the blood-brain-barrier and rapidly saturates brain cells with thiamine [24], which makes it a superior alternative to other forms of thiamines for restoring levels in the brain and central nervous system.

The most well-known proponent of TTFD is consultant paediatrician Dr Derrick Lonsdale, who pioneered the use of this molecule in clinical practice [25]. Lonsdale obtained licences to study TTFD extensively over many years, and has since authored multiple books, articles, and academic research papers on this topic [26]. His most recent book, co-authored by Chandler Marrs PhD, is “Thiamine Deficiency Disease, Dysautonomia & High Calorie Malnutrition” and comes highly recommended for anyone seeking to learn more about thiamine deficiency and its importance in our modern world.

For first time users who consider themselves sensitive to supplements:

How many capsules shall I take to begin with?

For people who have never taken thiamine TTFD before, it is best to start with half or quarter of a capsule. This can be done simply by opening a capsule and emptying a portion of the contents into a cold drink or cold food.

When is the best time to take Thiamax?

Thiamax is best taken in the morning time or early afternoon. If taken in the evening, it may disrupt sleep. Thiamax should be taken at least 1 hour before, or two hours after consuming coffee or green/black tea.

Can I take it with food?

Thiamax can be taken with or without food. The absorption is similar either way.

What are the side effects?

Initially some people can experience a “paradoxical reaction”with thiamine supplementation. This might include a temporary period of increased fatigue, brain-fog, and poor concentration. This reaction usually subsides within a few weeks.

What is the maximum dose?

Although some people can benefit from taking multiple capsules, it is advised that someone does not go higher than 3-4 capsules without the guidance of a healthcare practitioner.

Are there any other supplements which should be taken with Thiamax?

Generally, it is advised that people supplement with 200-300mg of magnesium on the same day as supplementing Thiamax, along with a good-quality B vitamin complex. However, you should consult with your healthcare provider for specific advice on this topic.

Thank you! Your submission has been received!
Oops! Something went wrong while submitting the form.